Uranus and Pluto are 2 of the so called outer planets (also called trans-Saturnal) of our solar system.

They are only visible with the help of telescopes.

In the sequence from the Sun, Uranus is the 7th planet and Pluto the 9th planet.

The time needed for an orbit around the Sun of Uranus is 84 years and of Pluto about 260 years.

These long periods for one orbit causes these planets to make only a limited number of mutual aspects.

However, when these planets make aspects it happens 3 to 7 times in a timeframe of a number of years.

In the current timeframe in June 2012 Uranus and Pluto will make for the first time the square aspect. This will be repeated 6 times until March 2015.

During this period from time to time Uranus and Pluto make Grand Squares together with other planets, because at these moment the faster moving celestial bodies (Sun, Moon, Mercury, Venus, Mars and Jupiter) have a position in Cancer and Libra. Such a Grand Square in the cardinal signs will be accompanied by violent energies. Square energies are always difficult to be dealt with because the related planets have a position in different elements, in the case of Uranus and Pluto at this moment, Fire and Earth.

Function of Uranus and Pluto

According to Rudhyar in his book “The galactic dimension of astrology, the Sun is also a Star” Uranus refuses to accept the limitations of the heliocentric view of the cosmos (the Sun as the center of everything). This view limited in the matter by the planet Saturn. This fact is beautifully illustrated by the fact that Saturn is the last planet visible without telescopes from the earth, but also by the fact that the rotation axis and the magnetic axis of Uranus differ strongly from other planets.

Uranus can cause violent destructive energies and especially destruct fortifications of ego centered symbolics, meant to make space for the urgently needed changes and innovations.

Pluto is the planet of purification., from power and impotence. Pluto makes everything hidden visible. The ultimate goal of Pluto is purification. Pluto is connecting us with the power of the galactic center, the divine root in ourselves. 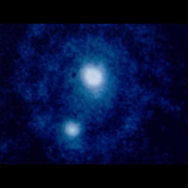 In the picture above we see Pluto together with Charon (Moon of Pluto). There are no detailed pictures available. For this we have to wait until the year 2015 when the New Horizons spacecraft will reach Pluto and accidently nearly together with the 7th and last hit of the square between Uranus and Pluto. In numerological terms the number 7 happens to be the number of the divine and earthly harmony, but also of fate and change. The message appears clear, we will have to envisage changes and they ultimately will lead to harmony between the earth and the divine cosmos. However the road will differ and will go through changes sometimes viewed as fate.

Significance of the square between Uranus and Pluto.

After the conjunctions between Uranus and Pluto in the years 1965 and 1966 the following square astrologically is viewed at as a period of crisis. The processes of change that started together with the last conjunction will be tested and corrected. In the years 1965/1966 Uranus and Pluto had 3 conjunctions in Virgo. These were the years of “flower power’, “make love, not war’  and democratic improvements in all parts of society, especially where burocratic institutions formed a barrier.

Assad in power in Syria by a military coup;

Beginning of the Cultural revolution in China;

First landing of a satellite on the Moon;

Venera 3 lands on Venus as the 1st human made object;

First astronomical lab in an orbit around the earth

Meteor viewed at daylight in the air above Canada and the US leaving the earth atmosphere without impacting the earth.

Also the constitution of the European Union is related to the conjunction. As a result of the treaty of Rome in 1958, the existing 3 separate European institutes: Economic Community, Nuclear Energy and Coal and Steel were merged in 1967 and were managed from that year by one Commission, one Council and one budget. In 1993 as a result of the treaty of Maastricht the next step was taken at the time Neptune and Uranus made a conjunction (an idealistic innovation). However where by that year Saturn and Pluto made a square the problems in the agreed structure will be built in.

Starting from the meaning of the square we could expect significant events with respects to the subjects above. We simply could agree that the situation in countries as Zimbabwe, Syria and Indonesia, will be highlighted in some way. What happened in 1965/1966 was not in the common interest, so we may expect events meant to realize changes. Something like could be expected for China, although the culture in this country is totally different from the Western culture, where democracy and capitalism are believed to be the ultimate heaven.

In the area of space craft and possibly about extra-terrestrial life, we could also expect breakthroughs. The US abandoned the Shuttle program and the international space station will be dismantled, but what will come in place?

With respect to the European Union we can expect the structural problems to become clear. The challenge to manage them will have to be related to new ideals for the future.

Individuals born in the years 1965 and 1966 could expect influences of this square. Especially in those cases where the ego has developed strongly and interests of society and other people are not taken into account. Obsolete points of views that are defended fiercely will have to be abandoned. But because these aspects have a great influence on a mundane level everybody can expect more or less influences from this. The way this will be of influence will be dependent from the individual horoscopes.

On a global level, the most influential squares can be expected on April 21st 2014, because at the same time there will be square aspects with other planets together forming a Grand Square. Also November 1st 2013 and the final one on March 17 2015 can be expected to have impact because they will coincide with solar eclipses. Already in July and August 2011 this aspect can be of influence because Uranus and Pluto will be almost in a square  aspect with an orb of 1 degree. The beginning of August 2011 this will coincide with a Grand Square with Saturn in Libra and Mars in Cancer. The attacks in Norway end of July could be seen as an related event.